OneOpinion Review: Is it a Safe and Legit Paid Survey Site? 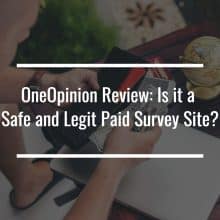 If you’ve answered online surveys for money, then you’re probably familiar with the frustration of repeatedly getting screened out of surveys. And when you finally DO complete one, three hours have flown by. If you’re considering OneOpinion as your new platform, you’ve come to the right place because I will share my honest OneOpinion review.

Is OneOpinion one of those paid survey sites that demands a lot of your time, yet fails to fairly compensate you?

Will you be the next frustrated customer complaining that your account was shut down for unknown reasons, when all you did was answer their surveys honestly? Is OneOpinion worth your time?

I am neither affiliated nor sponsored by OneOpinion. Thus, this OneOpinion review is completely free of bias towards them.

One thing is certain: your experience with OneOpinion won’t be pleasant. As if rare survey invites and a ridiculously high payout minimum aren’t enough, they’re one of the lowest-paying survey sites out there. When you compare them to one of the industry’s leaders, Swagbucks, you’ll immediately notice the difference.

You’ll see that all of the problems OneOpinion has are solved by Swagbucks. I’d honestly be surprised if you report back with a negative experience after joining them.

If you don’t have a lot of time to spare, read this high-level overview. But if you want to get into the nitty-gritty details, I suggest you read the entire article.

OneOpinion is just like any other second-rate paid survey site that promises too much but fails to deliver and is guaranteed to be a huge waste of your time. Here are the reasons why:

a. Low Survey Density. On top of the few surveys you’ll be answering per month, you’ll get screened out often, too, leaving you with fewer surveys than you originally had.

b. High Payout Minimum. The high payout minimum ensures that it’ll be a long time before being able to redeem rewards.

c. Tracks Your Online Activity. OneOpinion, along with associated third parties, tracks your online activities even after explicitly telling them not to.

As you’ve probably concluded, OneOpinion’s earning opportunities are very poor and it doesn’t deserve even a single minute of your time. If you were thinking about earning anything significant from OneOpinion, think again. They just can’t offer anything close to that.

OneOpinion is a paid survey site that was formerly under the umbrella of Critical Mix but has now been acquired by Dynata—a market research firm handling various paid survey platforms.

Other platforms under Dynata are: Opinion Outpost, ValuedOpinions, and iPoll, to name a few. If you’ve been with any of these platforms, best expect that you’ll have the same experience with OneOpinion.

Signing Up is Free

Like most paid survey sites today, joining OneOpinion is free. The initial sign up process was quick, taking only 10 minutes. You’ll be asked to agree with their standard policies, then provide basic personal information to complete your profile.

From there, it’ll take 3 to 5 business days to verify your information. As you can see, you’ll have to wait quite a while to get going.

“Getting Screened Out Is Normal, Right?”

It’s really hard to qualify for a survey in OneOpinion. You have to answer screener questions for every survey invitation you receive, which becomes a little annoying because you’ll have to enter the same answers about yourself over and over again.

People complain about getting screened out often, too. There’s no compensation of any kind when you’re screened out — you can find this in OneOpinion’s Terms & Conditions. This is extremely frustrating because you may get kicked out of a survey 30 minutes in and receive nothing in return.

This really grinds my gears because I value my time and I know you value yours, too. Getting screened out is normal in the survey world, but the least OneOpinion can do is compensate members for their time.

On the other hand, if you’re lucky enough to finish multiple surveys, that’s great! Good luck reaching their payout minimum, though. It’s 25,000 points, one of the highest among paid survey sites.

If you’re new, surveys are the only way to earn points. OneOpinion offers no promos, discounts, or any other way for you to save or earn money. Therefore, you’ll have to invest a lot of your precious time into the surveys to reach that 25,000 point payout.

Unlike OneOpinion’s sister platform (Valued Opinions), where the only payout option is through gift cards, OneOpinion offers a payout option through PayPal. Since OneOpinion is only available in the US and UK, this should be a convenient redeeming option for members in said countries.

Are you familiar with the “Do Not Track” preference that is available in your browser? DNT is a web browser setting that requests that a web application disable its tracking of an individual user.

When you choose to turn on the DNT preference in your browser, your browser sends a special signal to websites, analytics companies, ad networks, plugin providers, and other web services you encounter while browsing to stop tracking your activity.

There are a plethora of peer reviews out there on SurveyPolice and TrustPilot. Let me tell you — it ain’t pretty. Here are some of them:

Here’s Robert on SurveyPolice reporting that his account got closed for no reason.

Jeff posted his experience on SurveyPolice reporting about OneOpinion’s lackluster customer service. Reviews like this are fairly common among the platforms under Dynata, not just OneOpinion.

Here’s Pastor Thomas Anthony on TrustPilot voicing his frustration towards OneOpinion. It appears that he also went through what multiple members are experiencing, such as accounts getting shut down for unknown reasons.

It All Boils Down to One Thing: Legit ≠ Reliable

Even though it’s technically a legitimate paid survey site, my OneOpinion review is that it is unreliable. On top of the few surveys available per month, you’ll get screened out of some (without compensation). This leaves you with fewer surveys than you originally had. Dynata also continues to track your website activity even after clearly telling them not to.

It’ll take a lot of time before you could redeem your points because of OneOpinion’s high payout minimum.

Add the fact that there are a lot of members complaining that their accounts are getting shut down for unknown reasons (sometimes before a major payout) and customer service not being of any help, joining OneOpinion seems to be a big fat nuisance.

I just cannot, in good conscience, recommend OneOpinion or any platforms under Dynata. It’s a huge waste of time. You’re better off pursuing a different part-time venture that pays better with the time OneOpinion demands.