What are the Highest Paying Writing Jobs? 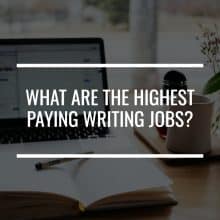 Writing is a vast industry with many job opportunities, and every single one pays differently. Each carries varying degrees of difficulty and creative freedom, and not every writing job will suit you.

Let’s start with perhaps one of the most well-known forms of writing: novels. In the science fiction genre alone, the average advance for a first time writer is ~$6,500. For an experienced author, low five-figure advances are pretty standard as well.

Most writers don’t earn their advances from book sales, and if they do, it takes at least a couple of years for royalties to reach them. Of course, if sales are booming, that figure can be exceeded (but that’s the exception).

The self-publishing route allows writers to generally keep a higher percentage of their gross profit, but it comes with disadvantages. For one, authors have to pay out of pocket for editing, cover art, and marketing (unless you want to do it yourself, which is really not advised). Self-publication also cuts authors out of the print market, a significant percentage of all book sales (around 70%).

Despite getting more per sale, self-publication isn’t a guarantee that you’ll make more money than with a publisher. For the AVERAGE writer, the gross pay for writing books is low.

The minimum pay for screenwriters isn’t that bad (mostly low to mid five-figure sums), but be aware that competition for screen work is extremely meticulous; it’s a hard industry to break into and many screenwriters go years without selling a screenplay. If you’re not a member of the Writers Guild of America, screenwriting becomes more difficult and pays less.

In the science fiction genre, the minimum rate to be considered as a qualifying market, according to the Science Fiction and Fantasy Writers of America, is six cents a word. Some markets pay rather more, and some pay somewhat less. There’s no consistent figure. At the minimum rate, a 6,000-word short story will get you around $360.

Unless you can sell an amazing amount of short stories per year, you’re unlikely to make more than a few thousand dollars a year in this field.

Full-time journalists still exist even with the obvious pressure that resulted from the collapse of newspaper/magazine advertising. A full-time journalist would earn an annual salary of $23,000 20 years ago, and the starting salary hasn’t changed substantially since.

However, many online-only journalism sites exist now and pay reasonably well. The best of these sites tend to have their pick of journalists, so competition is extremely tough.

Copywriting, in my opinion, is the most viable and stable career option for a writer who’s starting out because it’s possible to earn six figures with experience and contacts – and a refined ability to focus.

Exactly how much a copywriter makes depends on whether they work full-time, part-time, on-staff, freelance, or as a contractor. Contractors earn more per hour than the hourly equivalents of their on-staff counterparts. Freelancers are harder to gauge since their pay depends a great deal on the writer’s willingness to network and hustle for work.

What are the Highest Paying Writing Jobs?

The pay for writing jobs varies and depends on your passion and willingness to write about every sort of topic (even the ones that might not interest you).

Write about everything. Get multiple payment streams going so that when one disappears, you have others to keep you afloat. Work hard on writing fast, well, and to specification.

For the average writer, all forms of writing pay poorly. If you wish to earn money fast, get a day job and develop your writing skills on your time. There’s no shame in that!