Opinion Outpost Review: Can You Make a Decent Earning? 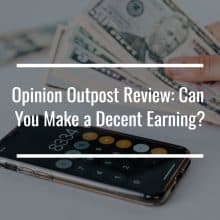 If you happen to be a part of that 5%, then I’m sure you’re familiar with the frustration incompetent paid survey sites may bring: surveys that pay absolute crap, surveys that disqualify people in the middle of answering them, and accounts getting shut down out of nowhere.

In this review, we’ll be taking a look at Opinion Outpost — one of the platforms that pays members to answer surveys and share their opinions. We’ll be answering these questions:

I’m not an affiliate of Opinion Outpost in any way. There are a lot of reviews saying great things about Opinion Outpost, but those are by affiliates who are looking to make a commission for the traffic they drive to the site.

I know you have one goal: to make decent money. However, with Opinion Outpost, that’s close to impossible. Being paid $1.60 USD an hour is no way close to decent.

Don’t be haunted by the numerous reviews, crying for help because accounts were shut down for seemingly unknown reasons, that could have prevented you from becoming Opinion Outpost’s next victim.

Go ahead and check out Swagbucks now and you’ll be redeeming rewards in no time.

These are busy times, and many folks don’t have a lot of time to spare. So if you can’t read the entire review, read this brief version to know everything that needs to be known about Opinion Outpost.

I cannot, in good conscience, recommend Opinion Outpost because of the following reasons:

a. Opinion Outpost Pays Absolute Crap. The estimated pay per hour is $1.60 USD/hr. Combined with the high probability of getting screened out, it’ll take quite some time to be able to payout. The entry to a quarterly prize draw compensation when getting screened out doesn’t help, either.

c. Privacy and Security is Compromised. The personal information of members who are no longer using Opinion Outpost’s services are transferred to a third party to be sold.

Opinion Outpost is leaning dangerously close towards being a scam. Don’t expect to earn anything substantial here unless you plan to commit a huge amount of time and effort.

What is Opinion Outpost and How Does it Work?

Opinion Outpost is a platform that pays people to share their opinions and answer surveys. It’s under a market research firm called Dynata (formerly known as Research Sampling, LLC).

What a market research firm does is gather and analyze data about customers, competitors, distributors, and other players in the marketplace. This is done through various survey platforms like OneOpinion, E-Rewards, and Valued Opinions, which are all also under Dynata.

Opinion Outpost works just like any other paid survey site: answering a survey rewards you with a given amount of points, which can then be exchanged for rewards that are offered on the paid survey site.

It’s Free and Easy to Sign up with Opinion Outpost

Joining Opinion Outpost is free, which seems to be a lot more common among paid survey sites today. However, the website design seems outdated and is really bland. The homepage looks like it was designed by someone stuck in 2005.

The signup process for Opinion Outpost is fairly straightforward and hassle-free. Once signed up, access to the members’ area will be given and surveys should be available within minutes.

Once in the members’ area of Opinion Outpost, a startup survey will immediately be available. This survey seeks personal information in order to determine which demographic a member fits in, such as race and ethnicity, quality of life, and income. These pieces of information are required upfront before taking any other surveys to earn points.

When finished, you’ll be rewarded 5 points. Unfortunately, these points can’t be translated into cash yet.

How Much Does Opinion Outpost Pay?

Keep in mind that you won’t be consistently answering surveys. Opinion Outpost sends out only a couple of survey invites per week and you won’t qualify for even a half of those, leaving you fewer surveys to complete.

While screening out of surveys is already as frustrating as it gets, Opinion Outpost compensates members getting screened out by entering them into a quarterly prize draw (one entry per person) — which is as good as rubbing salt on the wound.

If you’re looking to redeem points for cash, you’ll need 100 points, which is equivalent to $10 USD on the Opinion Outpost platform (admittedly low compared to other paid survey sites). However, the lowest reward option offered is a $5 Amazon gift card, which just requires 50 points to redeem.

Opinion Outpost is a reference source to surveys on other platforms, which means every time you start a survey on Opinion Outpost, you’ll have to repeatedly answer pre-screener questions. Only then will Opinion Outpost show a survey’s payment and estimated time of completion.

For example, Opinion Outpost may claim that a survey will result in “10 points for 15 minutes.” When transferred to the actual survey site, the estimated time turns out to be approximately 20 minutes.

This occurs with such a degree of frequency that I’m led to believe Opinion Outpost intentionally “lowballs” the time estimate.

Is Your Information Safe with Opinion Outpost?

Six months after inactivity, your PII will be transferred to a third party and be up for sale.

The only way to stop this is to contact Dynata directly, which is something most of us won’t think to do.

If you think that Opinion Outpost won’t be one of those survey sites that recklessly shuts down the accounts of their members, this section from their Terms & Conditions clearly states otherwise.

Your account can be terminated whenever and for whatever they want, even without an investigation.

Opinion Outpost’s rating on SurveyPolice is just a bit above 2 stars. That’s obviously not a good rating.

Let’s check out the reviews on SurveyPolice to find out what other people are commonly experiencing.

Here’s a review by Francisco, sharing the frustration of his account getting terminated out of nowhere and without any explanation. He also says that he never had a problem until Dynata acquired Opinion Outpost.

Here’s one from Jojo, who recently joined Opinion Outpost. It seems that their account was terminated right after requesting a payout. Take note that once an account is terminated, all of the points in that said account will be instantly voided.

This review from Wendy also describes her account being frozen just as she requested a payout. Seems shady indeed.

There are countless reviews complaining about accounts getting terminated out of nowhere, frequently right after a payout has been requested.

Asking customer service seems to lead to a generic automated reply, which is practically useless. It’s clear the Terms & Conditions discussed earlier are conveniently being practiced.

If you’re doing paid surveys in order to put some change in your pocket, Opinion Outpost might barely do the job. The time investment required to make anything out of Opinion Outpost’s surveys is too great.

No one wants to be paid ten bucks a week (at best). The majority of the time spent will be consumed not by completing surveys but by repeatedly getting screened out of surveys, the only compensation being an entry to a quarterly draw.

No, getting screened out often won’t increase the chances of winning, as one entry is only allowed per person and multiple entries will be void.

Is Opinion Outpost safe? No, it isn’t. Your information is greatly compromised the moment you join. You could never rest easy knowing that your account can be terminated any time they want, causing your hard-earned points to disappear in a moment.

Add the lack of transparency when it comes to the duration of their surveys, Opinion Outpost strays far from a legitimate paid survey site.

Please share what your experiences are with the community in the comments.

Your contributions will provide useful information for many others like you who might be looking to make money online by taking paid surveys.

Also, don’t forget to check out the review for our recommended paid survey site, which you can access here.