American Consumer Opinion: Is This a Trap? 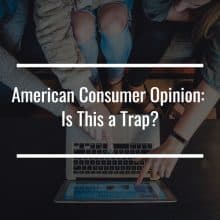 Here comes another paid survey site that claims to pay people by answering online opinion surveys. Is this another one of those sites promising a sustainable way to make money by answering surveys, but with no follow-through?

Will they be able to offer cash payouts that are actually worth the time and effort invested?

Paid survey sites have been around for quite a while. The idea of making money online through answering a few questions is tempting — or so you would think.

There are many paid survey sites out there that will eat up huge chunks of your time by having you answer surveys with seemingly endless questions until you’re drowned in a sea of words.

American Consumer Opinion is one of the oldest paid survey sites. The fact that they’re still standing must mean they’re doing something right.

Let’s see for ourselves if they really are what they claim to be.

I am in no way affiliated with American Consumer Opinion. Thus, this review is not intended to promote their service and is my sole unbiased opinion.

Bottom line is: ACOP is not worth a minute of your time due to how inefficient and low-paying their opportunities are.

You’re better off spending your time on a platform that’s more reputable and has better-paying opportunities like Swagbucks (industry’s top paid survey site).

You’ll find that once you join Swagbucks, you’ll have a much better experience in every way possible compared to what you’ll experience in ACOP.

Time is of the essence. If you’re in a hurry (as most of us nowadays are), go ahead and glance over this section. You’ll be able to conclude if American Consumer Opinion is legitimate and the right fit for you.

However, if you want to dig into the nitty-gritty details of their website, feel free to skip this section and read the entire article.

Like any other paid survey site, ACOP claims to be able to pay their members through answering surveys. Although ACOP seems to be a legit website, I cannot, in any way, recommend you invest your time into ACOP due to these drawbacks:

Due to these drawbacks, it will take a huge amount of time for you to accumulate enough points to reach ACOP’s payout minimum.

If you were dreaming of making a stable income with ACOP, you’ll be greatly disappointed. It’s definitely not worth your while based on the time it demands and how much it pays out.

The process to sign up was very quick, though. There were only a few basic background questions that asked for annual income and ethnicity, but there were no incentives after signing up.

However, there’s a new member survey immediately available after signing up that is worth 5 points. One point is worth a penny, so it’ll take a hundred points for you to make a dollar — yikes.

My First Survey with ACOP

The surveys offered by ACOP vary from short surveys (screeners) to long surveys. Screeners are worth 5 to 50 points OR an entry into a monthly prize drawing (which sucks).

Long surveys, on the other hand, are not always available and are worth 100 to 5,000 points. They’re much harder to come by and take more of your time.

It took about 24 hours to receive my first survey invitation. This time frame may vary depending on the target demographic and your profile.

What took 24 hours for me may take days for other people. I was really excited to earn some points and make a few bucks. Little did I know that what was waiting for me was utter disappointment.

Why? While answering questions for a survey their system showed I qualified for, I was suddenly kicked out. While very confusing, I began another survey, but the same thing happened. This incident seems to be common among the members on the website.

What frustrates me more is the fact that there is no compensation when getting screened out. Got screened out 30 minutes into a survey? All that time and effort was for nothing.

What Are The Payout Options?

If you happen to be lucky enough to qualify for their surveys, you’ll be able to cash out through PayPal once you reach the 1,000 point minimum. Another payout option is HyperWallet, but that can take 8-12 weeks to receive your money.

Yet another option is to take advantage of the $100 Amazon gift card sweepstakes for 100 points, this option doesn’t require the 1,000 point minimum. You could also use your points to donate to ACOP’s choice of charity.

The cashout process should be easy with PayPal, but not all countries are supported. This may be an inconvenience since the other options are not ideal and can delay your payout.

But if you live in the U.S or any other major country, you shouldn’t encounter this problem.

I Tried To Refer a Friend

I wanted to refer my roommate to ACOP, but upon checking their referral incentives, I was shocked to find out that all they offer is an entry to a monthly draw worth 5,000 points! What the hell is that?

ACOP doesn’t guarantee you any points if you get someone to join. This is a huge waste of time and the only way to expect anything to come from it is if you just picked up a four-leaf clover.

What Are Other People Saying?

ACOP has accumulated quite a number of negative reviews. This, of course, is not to be overlooked. All you have to do is Google “American Consumer Opinion” and see that they have quite the bad reputation. Let’s refer to SurveyPolice and check out what people are saying.

I came across a review that described the same experience of being kicked out in the middle of a survey.

Here’s another review by Jennifer. She’s done a great job describing the experience that members will go through once they join ACOP.

These reviews are surprising considering that ACOP is one of the longest standing paid survey sites out there. I guess just because you’ve been around up a long time doesn’t mean the services you offer are great.

So, we’ve seen how ACOP’s website works, how they pay their panel members, and what other people are saying. ACOP reels people in by promising great rewards through answering their surveys but then under-delivers in every aspect possible. If that doesn’t look like a trap to you, I don’t know what is.

Though ACOP is a legitimate paid survey site, there are three main problems that keep it from being worth your time. First, on top of the few number of surveys offered per month, you’ll definitely get screened out very often (while receiving nothing in return).

That leaves you with fewer surveys than you originally had. This makes earning points very difficult. Second, you can’t even rely on screeners because most of the time you’ll only be rewarded by raffle entries. Third, there’s no referral system. This leaves surveys as the only way of earning points.

With all that said, you can be sure that it’ll take a lot of time before you can accumulate enough points to reach ACOP’s payout minimum—possibly taking 4-6 months as per a review by a member.

If you’re expecting to make a substantial amount of money from this website, you’ll definitely be disappointed. I’d suggest diverting your time and effort towards a more fruitful venture.

Nevertheless, if you’re bent on making money online through paid survey sites, there’s one called Swagbucks that’s the complete opposite of ACOP. It just keeps on giving and giving, and won’t leave you disappointed.

I can’t recommend Swagbucks enough. This is a paid survey site that delivers more than what they promise and won’t leave you hanging. They’re also not limited to the U.S.

Swagbucks’ website is very easy to use and the home page is easily navigable. Looking for additional surveys and other offers can be done easily from their home page.

Great Paid Surveys, But it Doesn’t End There

Swagbucks offers surveys that pay handsomely, but that isn’t the only way to make money! Last night while browsing NectarSleep (an online mattress shop) for a new mattress to replace my old one I learned that I could earn 2500 swagbucks (or $25 dollars) through my purchase.

Swagbucks is also partnered with other major businesses where you can earn more and more swagbucks for every purchase. These are some of them:

Get Paid Even If You Didn’t Qualify

Didn’t qualify? Unlike APOC, you’ll still get paid by Swagbucks even if you get screened out of a survey. This just shows that they really value and respect you and your time. You won’t have to fear your efforts getting wasted.

At the end of the day, I know you want one thing: to make money through paid survey sites. My job is to vet them and provide honest feedback.

Compared to ACOP, Swagbucks is just way better. They offer great sign up bonuses, compensation when you’re screened out in the middle of a survey, and cash backs when shopping online. None of which are present in ACOP.

Check out Swagbucks today and see for yourself what a superior platform it is compared to American Consumer Opinion.