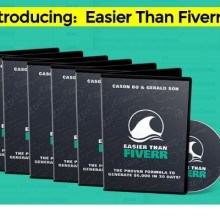 His Promises and Claims

Easier Than Fiverr is a system put together by Cason Bo, who claims he makes $60 to $80 per day without any investment, using his system. He says with this system, you don’t need a website, you don’t need to expose your real name (you can just use a pen name), you don’t even need to upload your real photograph, and all the time you need to put into it is 20 minutes per day.

He says you get your money paid into your PayPal account instantly. Meaning that you don’t have to wait for two long weeks to receive the fruit of your labor, as it is on Fiverr.com. He says it takes 15 minutes to set up and sail away into profit. He says rather than grope around, trying to figure things out on your own, you can let him help you go straight to the meat and potatoes.

He further buttresses his claims by saying the methods he teaches in The Easier Than Fiverr system have no entry barrier and that anybody can succeed with them. Please visit his sales page through the link I provided above to remind yourself of the rest of his promises yourself.

I’m not in any way affiliated to Cason Bo, and I’m not promoting his product, Easier Than Fiverr, for sale. I’m only reviewing it honestly as I have reviewed many other Internet Marketing products to protect my readers from losing their money by providing them with insider information, which would enable them decide whether or not these make-money-online products are worth spending their hard-earned money on. Often, I also use my reviews to help such folks by pointing them to a 100% free, remedial alternative that will help them with their Internet Marketing needs.

Easier Than Fiverr is a product that comprises of 17 training videos on how to make money on an outsourcing platform called Source Market. Source Market has a lot in common with Fiverr and consequently holds potential to make users money. However, whether what Cason Bo has put together and named Easier Than Fiverr can help you make money on Source Market as easily as he claims on his sales page is a different thing entirely and is what this review covers.

Well, well, well, what just happened here? Guys I was going to buy The Easier Than Fiverr system but my mouse pointer strayed away from the center of the sales page to somewhere near my browser’s tabs and a message immediately popped up that read, “WAIT! Don’t Leave Yet. See The “Easier Thank Fiverr” System for FREE! Click The Button Below For 100% FREE Access Enter Your Name & Email Below”.

For the record, the above quote is verbatim, including errors and  formatting.

I went ahead and entered the requirements for the first name and email fields and then laid back to see what would happen. Guess what. It was a down sell of  $17.93. He should have said so in the first place. Why did he have to lie so blatantly? He said it was a free access to the product and then “free” suddenly took on a new meaning – $17.93.

After I bought the product, there was  an upsell of some $57 product that required copying and pasting stuff to make $17 in 46 seconds. That sounded super ridiculous, so I passed. After I passed, there was a down sell of the same product for $7.75. That was even more ridiculous than the first pitch because nobody in their right mind would beg anyone to buy something so “lucrative” by bringing the price so stupidly low. So, I passed again.

Look! On his third sales page, the one on which he promotes the discounted offer of his mysterious product that makes him $17 in 46 seconds, he implicitly condemns The Easier Than Fiverr system. He had earlier claimed in his first sales page that it would take only 20 minutes per day to make money with The Easier Than Fiverr system, but read his words, as he pitches an upsell,   on one of the sales pages within his sales funnel as I quote them verbatim:

“With this, you’ll be able to go from zero to $5,000 every month… just by copy-and-pasting a few times a day! Don’t get me wrong…The ‘Easier Than Fiverr’ system itself is GREAT. BUT you still need a service that you can provide… or buy from a supplier every time you get a sale!

Instead of spending an hour servicing each of your clients……or having back-and-forth with suppliers that might deliver slower than their promised time..…or suppliers who can possibly rip you off..… or gamble on a service that might not even make any sales… wasting your time and effort……or suppliers who deliver a BAD service and that becomes your fault all of a sudden……and left feeling frustrated, confused and overwhelmed…Why not…Get a 100% Done-For-You Service…”

Those are his exact words except for the justified paragraphing format, which I applied for a neater appearance, and the paragraphing, which I supplied for easy readability. Other than those, all other things are exactly as he put them down. See the screenshot of that part of his sales page below. It’s the second image immediately after this paragraph.

Those were blood-red flags. But guess what. I changed my mind and decided to get venturesome a bit, especially as the amount required was less than $8. So, I paid for the upsell, and boom! There was another upsell. This time, it was a $27 upsell. Well, I yawned and passed (‘whole thing was boring).

Then, there was a down sell of $17. I passed again. Normally I wouldn’t come this far with a product like this, but I wanted to see the end of this sales funnel. Unfortunately, the funnel turned out to be a bottomless pit. There was no end that I could see.

Simply put, I ran headlong into a barrage of more upsells [yawns and stretches]. I wonder who’ll  save me from this free fall.

From the Intro Video to Video 4

I was finally allowed access to the product I purchased. There were 17 videos in the members’ area. The first, few videos (the intro video to video 4) were mostly motivational pep talk and a couple of theoretical hints on Source Market. For the record, some of these videos were just about six to seven minutes long, others were a little over one minute long. As I said, they were mostly theory. Watch them below.

In this video, which is a little more than three minutes long, Cason Bo demonstrates how to sign up for a Source Market account. It’s something anyone who’s been around the Internet can figure out on their own.

This video is also about examples of services one could offer on the Source Market platform.

This video is about technically setting up your first service. For Folks who’re new to the Source Market environment, this could prove useful.

This video is just a continuation of the previous video, video 8.

This video is about making your first sale on Source Market. Trust me, it’s pure theory. Watch it below.

This video is also about making your first sale, a continuation of the previous video – video 9. It’s as much theory as the previous.

This video is a theory on how to get reviews on the Source Market platform.

This video is on how to get people to align with you on the Source Market platform by over delivering. That sounds like a lot of hard work. Unlike the impression you’d have had reading the sales page of the product.

This video is a continuation of the previous one – video 12

This video is more theory on how to get your customers returning to you on the Source Market platform.

This video is on how to stand out in the competition, as a new member of the Source Market community, by the pricing of  your services on the Source Market platform. This goes without saying (it’s a thing of common sense).

This is a theoretical video on how to succeed on the Source Market platform. It’s pure theory. Nothing more.

This final video is where Cason Bo congratulates his viewers for successfully going through his entire training and encourages them to take massive action with a “15-minute action plan.”

Now, let’s talk about the upsell. You remember that upsell that was supposed to make its buyer $17 in 46 seconds? The first video of the upsold product started like something that was taken from the middle of an already playing video.

It just began from the middle of nowhere and was a truckload of bull crap and confusion. Needless to say, the rest of the other videos were equally useless. Please click on the images below to watch some of them.

You’ll probably make money with this if you’ve made money on Fiverr.com in times past, in which case you don’t even need this product to succeed on Source Market. Seriously, if you’re a newbie, I doubt your chance of making money with this product. But since the Source Market platform, on which it’s based, works like a legit platform such as Fiverr, no one knows for sure.

There’s a chance you can succeed if you’re very hungry for success and are willing to put in the work and time, especially as the competition on Source Market isn’t as fierce as that on Fiverr owing to the fact that Source Market is a relatively new outsourcing platform.

One thing is certain, though. This marketplace known as Source Market, of which Cason Bo speaks, isn’t a bed of roses. In Cason’s own words, which I quoted earlier, he implicitly condemns the marketplace to pitch an upsell, which turns out to be a bigger crap.

He spells out the possibility of working for hours on end and feeling frustrated, etc. If you read this review from the very beginning, you must have read all about that earlier. These not-so-attractive realities of the Source Market platform weren’t captured on his sales page. Simply put, Easier Than Fiverr grossly falls short of the promises on it’s sales page. That’s super misleading.

Now that you’ve seen Easier Than Fiverr for what it is, what do you think? Please share your honest opinions with the community below.

Eugenson is just a regular guy, except he doesn't believe in the security of nine-to-five jobs and loves to launch out on his own, trying to realize his dreams his way and at his time. He's tried to make money online for quite some time now, purchasing product after product, and has been swindled by a lot of cyber-fraudsters masquerading as make-money-online messiahs. He has many passions, some of which include drawing, painting, writing, and watching comic movies. He's on a revenge mission to hit fiendish scammers hard by writing reviews that reveal the truth about their unethical schemes and worthless products. He hopes to stifle their online, bloodsucking businesses by forewarning their potential victims and depriving them of the payments they depend on. You can consider Eugenson a friend who's here to give you objective product reviews, helping you uncover the online vampires and discover genuine opportunities.