If there’s one thing this training emphasizes, it’s that there’s more to Internet Marketing than a lot of product publishers would have you believe. Learning and understanding is only the beginning.

An Iron Mindset is the key to your success on this journey. That’s what makes the difference between those who succeed, and those who fail in this industry.

When you feel stuck, burnt out, or that you’ve lost focus, remember the three main factors of the Iron Mindset to help you get back on track: be extremely determined, understand that this is a non-linear journey, and never give up. 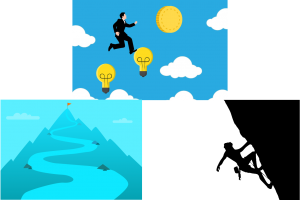 This is the advice I wish someone had given me at the very beginning of my entrepreneurial journey because it took nearly 10 years to figure out on my own:

The only way to fail in this industry is if you give up.

My goals and dreams have always been ambitious. When I first started in Internet Marketing, I didn’t have the discipline to reach my potential, so achieving those dreams was always a struggle.

The reason I was finally able to gain traction is because I actively shifted my mindset. I knew that in order to achieve the level of success I aimed for I would have to invest time and effort to become more disciplined.

Goal setting can be difficult; acting on those goals can be even more challenging. If you’re struggling to get started, I encourage you to research an individual who has reached or achieved the goals you’ve set, then emulate their behavior. Study that person’s patterns and habits, then start practicing them.

When you practice something new for several weeks it eventually becomes habitual. Be careful, though – the last thing you want is to burn yourself out before you even get started.

Adopting several new habits at the same time is not a great way to set yourself up for success because doing several things at once is overwhelming. Eventually you’ll blame yourself for washing out and not being as successful as you wanted to be because you attempted too much at once.

Don’t fall into the trap of attempting to read a book per week while also integrating a new exercise and sleep routine all at once. You’ll overwhelm yourself.

Instead, focus on adopting one new habit for several weeks, and only worry about introducing another once you’ve successfully mastered the first. This is the best way to form the habits of the person you’re emulating.

Along with everything else I discuss in FIMP regarding goal setting and mindset, focus on becoming the person you were meant to be; the one who can achieve your dreams. Ask yourself, “how dedicated am I willing to be in order to achieve success?”

The level of success you achieve is in your control. There will be many, many times you’ll want to give up because you’ll be overworked, overwhelmed, and tired. To be successful in the Internet Marketing industry, you’ll need to overcome those feelings.

…is if they give up.