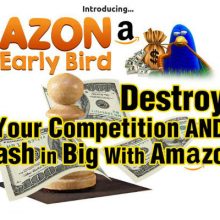 When I watched the video on the Azon Early Bird sales page, in which Gaz Cooper demonstrates how his video review of an Amazon product reached Google’s first page in three minutes, I had my doubts. But it seemed very convincing, and that wasn’t the only video on the sales page in which he repeated the same feat with different products. Gaz said he had the formula to destroy the competition and rake in massive amounts of sales commissions. I decided I was going to see things for myself after watching those videos and reading his claims.

I’m not promoting Gaz Cooper’s Azon Early Bird as an affiliate. This is only an objective review intended to provide information for my reading audience before they make a purchase decision.

Gaz’s Azon Early Bird teaches a legitimate way to make money online by selling physical products on Amazon as an affiliate. But on his sales page, he doesn’t spell out the required tools to use for success with the method he teaches. He only gives that information after check out. Furthermore, his training material is mostly theory. You’ll likely succeed with his method if you’re willing to hand him more money and wait for several months. The details are in the main body of the review.

I bought the Azon Early Bird and discovered right away that Gaz wasn’t as upfront as he should have been with his potential customers on his sales page. Right after I checked out, he threw an upsell my way. He stated in the sales video of the upsell that the secret of his success on Amazon was a software, which I had to buy if I wanted to succeed too. You might want to watch the video yourself below.

Why didn’t he state clearly on his sales page that his customers would need that software to see his level of results? After that upsell, there was no other sales pitch, and I was allowed access to my purchase.

You Can’t Make Money Right out of the Gate

Gaz Cooper wanted to make sure you bought the product before announcing that you’ll need patience to see results with his method. At the start of his eBook, he clearly states that you’ll probably have to wait several months before you make money with his methods. That means that if you’re looking to make some money fast enough to pay your bills by next month, you’ll be let down.

Gaz Cooper’s Azon Early Bird is just a 13-page eBook. That was the last thing I expected. With all the videos on the sales page, one would easily expect to find hands-on, step-by-step tutorial videos. Furthermore, all 13 pages of the eBook contain theory. A newbie who’s looking to sell physical products on Amazon for the first time can read every bit of the 13-page eBook and still not have a clue what they should do to start a successful, Amazon-based business.